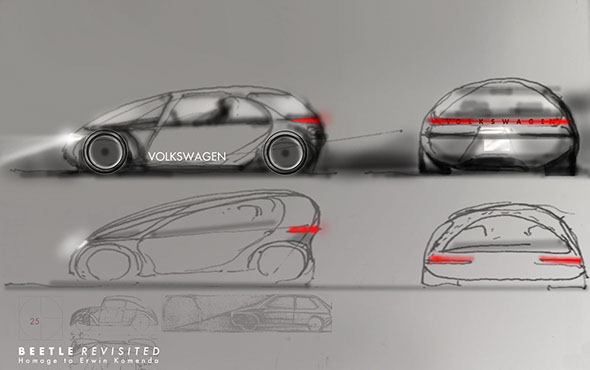 New New Beetle? People's Car. There is a difference of styling and design. If retro-style is nothing more than a second brew of yesterday, how about design as the fresh brew for tomorrow? This could hardly be more current than at times of heated discussions that the merging of Volkswagen and Porsche causes, eight decades after their founding. Both carmakers' minimalist designs can be traced back to one fine, low-key, and sophisticated genius: Erwin Komenda, the unsung hero of the first Volkswagen and early Porsches. The early 1930s state-of-the-arts streamline designs of this engineer became timeless million sellers and design icons. Late 1960s/early 1970s designs of the first Golf and the 914 VW-Porsche were literally cutting-edge reinterpretations in their own unique way. Giugiaro's Italdesign Golf opened a new book rather than rewriting old chapters. Today's fusion of companies, that always went and belonged together, sparked Hansjörg Göritz' new Beetle Re-vision, inspired by Komenda's original flow of lines, interpreting Giugiaro's  spaciousness, adding a splash of Lapine's first time all-integral shell for the ground-breaking 928.