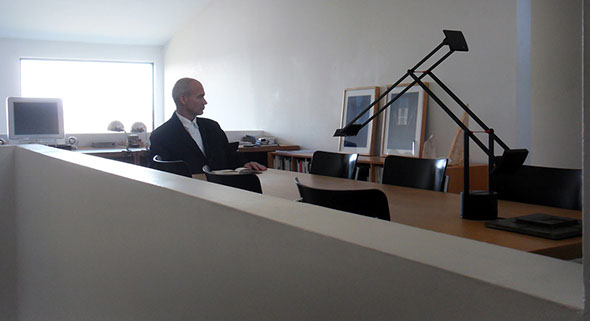 Hansjörg Göritz was born in 1959 in Hannover, Germany, into a family tradition of master craftsmen. Growing up in the vernacular context of Lower Saxony, his father taught him the art of building crafts. After his Baccalaureate, working as a carpenter, earning a Fellow Craft Mason diploma as best of the guild, in conjunction with  an evening master school for masons, he intended to travel as a guilds journeyman. Applied studies intervene, and while apprenticing in the studio of mentors Peter Hübotter and Lambertus Ledeboer, he makes his Grand Tours d'Orient to Italy and Greece. Despite being selected into the HDK Berlin School of Arts, he completed his self education in professional studies.

With a scholarship he enrolls at the AA School of Architecture, London, where his tutor Javier Castañón introduces him to the works of Luis Barragán - an enlightenment, to compelling clean design that is regional and international, traditional and timelessly modern. After intensive traveling, to Cistercian monasteries and English picturesque landscape gardens, to the works of Aalto in Scandinavia and Le Corbusier in France, he returns to Germany to establish his first studio in Hannover in 1986. An interim-freelancer at the Berlin studio of mentor Axel Schultes, he discovers the phenomenon of space as the central theme of silence and light in the works of Louis I Kahn. Encounters with the Shaker culture and Donald Judd's works later instigate ideas of the timeless complexity of simplicity.

First designs for private houses, interiors and remodels reveal reflections on own roots and early impressions as much as an intensive dialog with his clients. Contrary to any stylish mannerism, focus is on uncompromised simple and sensual beauty of pure precision that appears effortlessly pure and authentic. The elementary of place, space, light and material, indicate a search for sublime convention of silent appropriateness and universal validity.

Increasing commissions and scales lead to concise themes and typologies. Designs of significance include the Principality of Liechtenstein's State Forum and Parliament, the Hannover Expo 2000 metro rail station, the Baroque Wolfenbüttel Timber Market square, the KlimmtWood head offices, and the Knoxville Botanical Gardens and Arboretum in Tennessee.

The impetus with executed works is paralleled by his dedicated teaching. International invitations to prestigious universities, diverse exhibitions, lectures and conferences include the 1996 Venice Architecture Biennale, the Accademia di Architettura in Mendrisio in 1999, and Yale in 2014.

National and international awards, some three hundred publications, features, and videos on his works, core values, and essays add to the design discourse. Notable recognitions are a German Villa Massimo Rome Prize state nomination 1988, an Erich-Schelling-Award nomination 1998, the national Deubau-Award for Young Architects 1994, the BDA Award Lower Saxony 1994, the German Brick Award 1994, the Kunstpreis Baukunst of the Akademie der Künste Berlin 1996, a German Architecture Award 2009, and the international Brick Award 2010.

His works are selected as cultural paradigms by the Aga Khan Trust for Culture in 2000, and the Potsdam Bundesstifung Baukultur in 2008. Since 2013 he is an Affiliated Fellow to the American Academy in Rome.